Google brings its ‘.new’ domains to the rest of the web, including to Spotify, Microsoft & others

The content below is taken from the original ( Google brings its ‘.new’ domains to the rest of the web, including to Spotify, Microsoft & others), to continue reading please visit the site. Remember to respect the Author & Copyright.

A year ago, Google rolled out “.new” links that worked like shortcuts to instantly create new Google documents. For example, you could type “doc.new” (without the quotes) to create a new Google Doc or “sheet.new” to create a new spreadsheet. Today, Google announced it’s bringing the .new shortcuts to the rest of the web. Now, any company or organization can register their own .new domain to generate a .new shortcut that works with their own web app. Several have already done so, including Microsoft, which now has “word.new” to start a new word document, or Spotify, which has “playlist.new” to start adding songs to a new playlist on its streaming app. 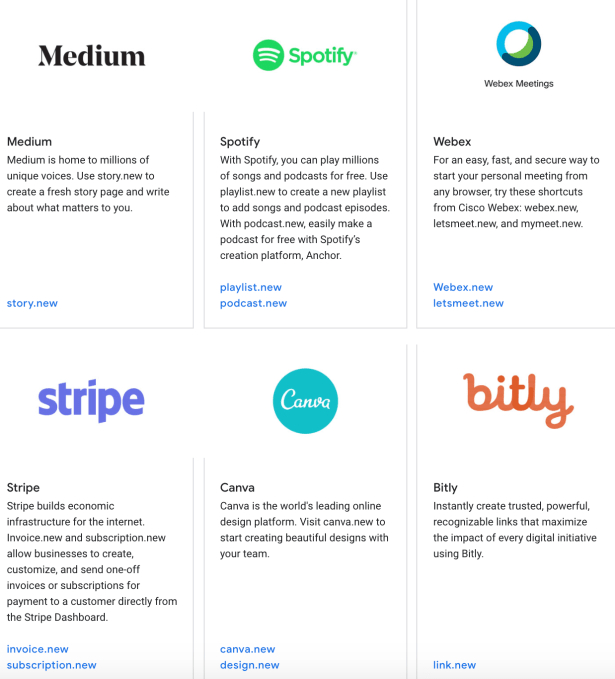 The domains are designed to get users straight to the action. That is, instead of having to visit a service, sign in, then find the right menu or function, they could just start creating.

However, some of today’s new domains aren’t quite as seamless as Google’s own. Because most Google Docs users are already signed in to Google, it’s easy to jump right to creating a new online document.

But other services aren’t used as often. That means Medium’s “story.new” doesn’t let you immediately start writing your blog post, unless you’re already signed in to Medium. If not, it drops you on a “Join Medium” sign-up page instead. This doesn’t make it necessarily any easier to use Medium — a better use case would have allowed the user to just start writing, saving their text under a temporary account, then prompt them to join Medium upon exit or clicking “publish.”

Meanwhile, Microsoft’s word.new, a direct rival to Google’s own doc.new, isn’t yet resolving. (Google tells us some of the shortcuts aren’t yet ready, but should be soon.)

Spotify also picked up podcast.new, which takes you to Anchor, in addition to playlist.new.

Considering the lineup, it’s clear that there’s not as much of a gold rush for these action-based domains as there are for other top-level domains. There are some fun use cases, like Spotify’s, and practical ones like word.new, but others are less compelling because they drop you on sign-up/sign-in pages because they’re not everyday services.

And some are just odd land grabs. Like Ovo Sound, the record label founded by Drake, which snagged “music.new” — a domain that you would think would go to a larger streaming service. (In fact, it’s somewhat surprising that Google’s own music service, YouTube Music, didn’t grab that one for itself.)

Google says any company can register these domains, all of which are secured over HTTPS connections like .app, .page and .dev domains are.

Through January 14, 2020, trademark owners can register their trademarked .new domains. Starting December 2, 2019, anyone can apply for a .new domain during the Limited Registration Period.

Posted on October 30 in category News

social_news_32620
https://blabley.org/google-brings-its-new-domains-to-the-rest-of-the-web-including-to-spotify-microsoft-others/
Google brings its ‘.new’ domains to the rest of the web, including to Spotify, Microsoft & others