The content below is taken from the original ( Underwater Crawling Soft Robot Stays in Shape), to continue reading please visit the site. Remember to respect the Author & Copyright.

When you think of robots that were modeled after animals, a brittle star is probably not the first species that comes to mind. Still, this is the animal that inspired [Zach J. Patterson] and his research colleagues from Carnegie Mellon University for their underwater crawling robot PATRICK. 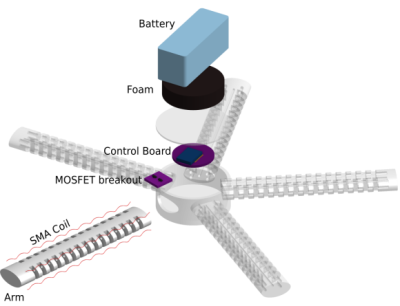 PATRICK is a soft robot made from molded silicone. Each of his five limbs contains several shape memory alloy (SMA) springs which can be contracted through Joule heating thereby causing the limbs to bend. The robot’s control board is sending and receiving commands via Bluetooth Low Energy from a nearby computer. To control PATRICK’s motion the researchers constructed a closed-loop system where an offboard OpenCV based camera system is constantly tracking the robot. As shown in the video below with an average velocity of 1 cm/s, PATRICK’s movement is a bit sluggish but the system is supposedly very robust against uncertainties in the environment.

In the future [Zach J. Patterson et al.] would like to improve their design by giving the robot the ability to grasp objects. Ultimately, also the offboard camera should be replaced with onboard sensors so that PATRICK can navigate autonomously.

Posted on April 25 in category News