In a quest to centralize all your media, Plex now includes web series

The content below is taken from the original ( In a quest to centralize all your media, Plex now includes web series), to continue reading please visit the site. Remember to respect the Author & Copyright.

At CES, media software maker Plex said it would this year add support for podcasts, web series and other digital media to its platform. It then rolled out podcasts this May, and now it’s introducing its own curated collection of web series. The company today is launching Plex Web Shows in beta, which will offer unlimited, on-demand streaming of online shows from brands like GQ, Saveur, Epicurious, Pitchfork, Condé Nast, The New Yorker, Fandor, Vanity Fair, and others.

The shows will span a range of interests, including food, home and garden, science, technology, entertainment and pop culture, says Plex. In addition shows from the big-name brand partners, which also include Bonnier, TWiT, Ovation and more, there will also be a handful of shows from indie creators, like Epic Meal Time, ASAPscience, Household Hacker, People are Awesome, and The Pet Collective.

Plex tells us that there will be over 19,000 episodes across 67 shows at launch, with more on the way.

Some partners and Plex have revenue share agreements in place, the company also says, based on ad sales that Plex manages. The details are undisclosed. 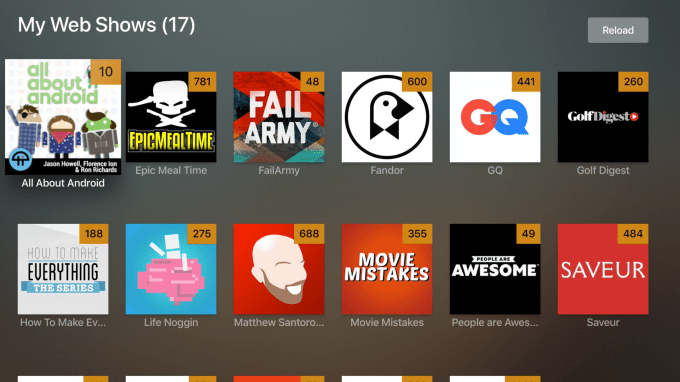 Plex got its start as software for organizing users’ home media collections of video, music, and photos, but has in recent months been shifting its focus to address the needs of cord cutters instead. It launched tools for watching live TV through an antenna, and recording shows and movies to a DVR.

It’s also recently said it’s shutting down other features, like support for streaming content from Plex Cloud as well as Plex’s directory of plugins, in order to better focus on its new ambitions.

Along the way, Plex has also rolled out other features designed for media consumption including not only podcast, but also the addition of a news hub within its app, thanks its acquisition of streaming news startup, Watchup.

With the launch of Web Shows, Plex is again finding a way to give its users something to watch without having to make the sort of difficult content deals that other live TV streaming services today do – like Sling TV, PlayStation Vue, or YouTube TV, for example.

“We really care about each user’s personal media experience, and want to be ‘the’ platform for the media that matters most to them,” Plex CEO Keith Valory tells TechCrunch. “This started with helping people with their own personal media libraries, and then we added over-the-air television, news, podcasts, and now web shows. Sources for quality digital content continues to explode, but the user experience for discovering and accessing it all has never been worse. It’s chaos,” he continues.

“This is the problem we are solving. We’re working hard to make tons of great content available in one beautiful app, and giving our users the tools to customize their own experience to include only the content that matters to them,” Valory adds.

Access to Web Shows is available across devices through the Plex app, where there’s now a new icon for “Web Shows.” From here, you’ll see the familiar “On Deck” section – those you’re following – as well as personalized recommendations, trending episodes, and links to view all the available web shows and a list of you’re subscribed to.

You can also browse shows by category – like “Arts & Entertainment,” “Computers & Electronics,” “Science,” etc. Or find those that were “Recently Played” or are “New” to Plex.

Each episode will display information like the show’s length, synopsis, publish date and title, and will let you play, pause, mark as watched/unwatched, and add to your queue. 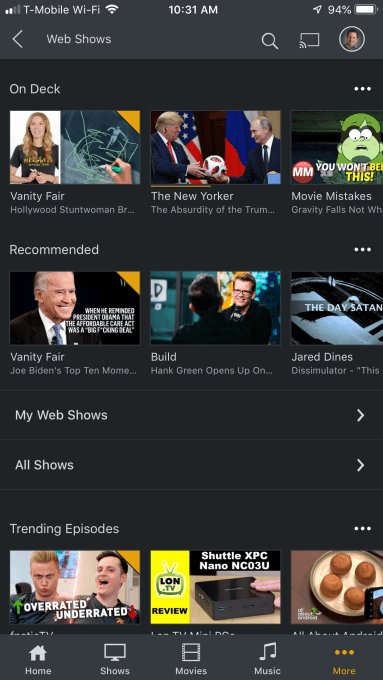 The launch of Web Shows is another step Plex is making towards its new goal of becoming a platform for all your media – not just your home collection, but everything that streams, too – like podcast, web series and TV. (All it’s missing now is a Roku-like interface for jumping into your favorite on-demand streaming apps. That’s been on its long-term roadmap, however.)

Web Shows will be free to all of Plex’s now 19 million registered users, not just Plex Pass subscribers. The feature is live on iOS, Android, Android TV, and Apple TV.

social_news_31885
https://blabley.org/in-a-quest-to-centralize-all-your-media-plex-now-includes-web-series/
In a quest to centralize all your media, Plex now includes web series