Hands On With the Raspberry Pi POE+ HAT

The content below is taken from the original ( Hands On With the Raspberry Pi POE+ HAT), to continue reading please visit the site. Remember to respect the Author & Copyright. 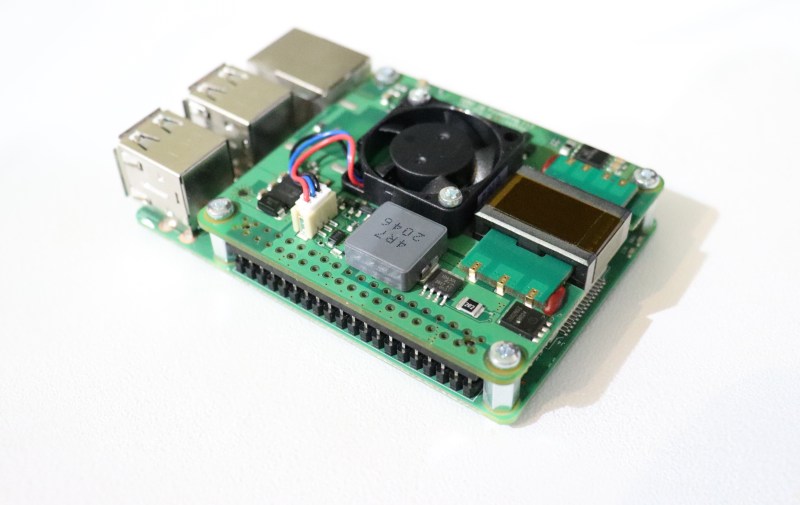 There’s a lot happening in the world of Pi. Just when we thought the Raspberry Pi Foundation were going to take a break, they announced a new PoE+ HAT (Hardware Attached on Top) for the Pi B3+ and Pi 4, and just as soon as preorders opened up I placed my order.

Now I know what you’re thinking, don’t we already have PoE HATs for the Pis that support it? Well yes, the Pi PoE HAT was released back in 2018, and while there were some problems with it, those issues got cleared up through a recall and minor redesign. Since then, we’ve all happily used those HATs to provide up to 2.5 amps at 5 volts to the Pi, with the caveat that the USB ports are limited to a combined 1.2 amps of current.

The Raspberry Pi 4 came along, and suddenly the board itself can pull over 7 watts at load. Combined with 6 watts of power for a hungry USB device or two, and we’ve exceeded the nominal 12.5 watt power budget. As a result, a handful of users that were trying to use the Pi 4 with POE were hitting power issues when powering something like dual SSD drives over USB. The obvious solution is to make the PoE HAT provide more power, but the original HAT was already at the limit of 802.3af PoE could provide, with a maximum power output of 12.95 watts.

The solution the Raspberry Pi Foundation came up with was to produce a new product, the PoE+ HAT, and sell it along side the older HAT for the same $20. The common name for 802.3at is “PoE+”, which was designed specifically for higher power devices, maxing out at 30 watts. The PoE+ HAT is officially rated to output 20 watts of power, 5 volts at 4 amps. These are the output stats, so the efficiency numbers don’t count against your power budget, and neither does the built-in fan.

More Watts Than We Bargained For

The official specs don’t tell the full story, evidenced by the initial announcement that claimed 5 amps instead of 4. That discrepancy bugged me enough, I reached out to the man himself, CEO [Eben Upton]. The head honcho confirmed:

The spec is that it will supply 20W, but it’s been designed to 25W to give us some engineering margin

So if you want to be super conservative, and ensure the longest possible life, keep your power draw at or under 20 watts. I tested the HAT to the point where it gave up, and not to let the cat out of the bag, 25 watts is still a bit conservative. More on that later. 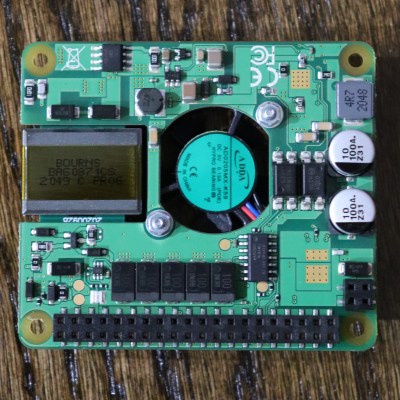 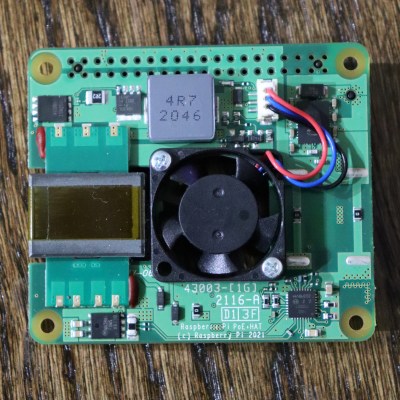 We know there’s a lot of available power here, but it’s not exactly easy to get to. For instance, the Pi 4 can push up to 1.2 Amps of power through the USB ports. At 5 volts, that’s only 6 watts of power, where’s the rest? In theory there’s a simple answer, as the HAT delivers power back through the 5v GPIO pins. All we need to do is jumper on to those pins and… Those pins don’t protrude through the HAT at all.

I would have loved to see an official solution to make the GPIO pins accessible with the HAT on, and not a inelegant solution like using those hokey pin extenders that were recommended for the original PoE HAT. Are we foiled, then? Nope. You see, there’s a good 1/4 inch of GPIO pin visible between the Pi and the HAT. It’s just enough room for a good old fashioned wire-wrapped connection, along with some solder for safety.

OK, now we have access to more than 6 watts of power. There are two obvious questions: How much power, and what can we do with it? To kill two birds with one proverbial stone, I grabbed a string of RGB LEDs and wired the voltage supply directly into the 5v rail. The PoE+ HAT has a wonderful feature — it adds a sysnode that tells you exactly how much current the HAT is providing. cat /sys/devices/platform/[email protected]/power_supply/rpi-poe/current_now

For testing the HAT, I invented a new unit of measure, the Cyberpunk Neon-purple Pixel. I used the PoE+ HAT to measure the power consumed by the Pi and Pixels, also recorded the power use reported by the PoE switch, and used a non-contact IR thermometer to find the hottest point on the HAT after a few minutes of powering the LED strip.

I repeated the experiment with the original PoE HAT, and you can review my raw results if you’d like. There are a couple minor caveats, mostly related to temperature measurement. My IR Thermometer doesn’t provide the rich data that a full IR camera does. Additionally, I was limited to measuring just one side of the PoE boards. I believe that the hottest spots on the original PoE HAT are on the underside of the board, while on the new HAT, seem to be on the side facing away from the Pi — that’s a win in itself. All that to say, my temperature measurements of the original HAT are probably quite a bit too low.

So remember how the first iteration of the PoE HAT had some problems? The big one was that some USB devices could trip the over-current protection at much lower levels than they should have. There was the additional issue of the board getting ridiculously hot at full load. There have been reports of the PoE+ version having some similar launch warts. The problems that have been identified are: high temperature, high power draw from the HAT itself at idle, the 1.2 amp USB limit, a long bolt that contacts the camera connector, a louder fan, and odd behavior when powering the Pi and HAT over the USB C connector. I’ll step through these one at a time. These are legitimate concerns, and I’m not necessarily here to debunk them, but I will put them in context of my own testing. Edit: Shoutout to Jeff Geerling and Martin Rowan, linked above and below, for their early work on reviewing the PoE+ HAT.

First up is temperature. The PoE+ HAT measures nearly 52°C at idle, at its hottest measured point. That is quite warm, and is hotter than the 44.5°C I observed on the original PoE HAT under similar conditions. This seems to be in contention with what [Eben] had to say about temperatures:

Thanks to improved thermal design it should run cooler (measured at the hottest point on an uncased board) at any load.

I can think of one explanation that satisfies all the observations. The original HAT’s hottest point is between the HAT and the Pi itself. This is observable in the EEVBlog video linked above. I tested with the HATs installed on the Pis, making it essentially impossible to get a reading on the underside. Setting that explanation aside, my measurements indicated that the original HAT got very hot at higher power outputs, while the PoE+ HAT stayed quite stable. Above 7 watts of power output, the new HAT ran cooler as per my measurements.

The USB ports on the Pis only supply 1.2 amps. This is annoying, but isn’t a weakness of the PoE HAT at all. We can hope for a future Pi revision that raises that limit. Until then, the workaround of tapping power directly from the 5v rail works nicely.

As for the long bolt, I’ll let [Eben]’s response speak for itself:

A number of people have found that the bolt touches, but does not damage, their camera connector. We’re likely to back it off to an 11mm bolt (10mm, as has been suggested in one or two places, is definitely too short) in a future production run.

The fan is louder at full speed, but quieter at its lowest speed. Additionally, it moves more air at full speed, 2.4 CFM compared to 2.2 from the older hardware. With a few tweaks to the fan’s trigger temperatures, the new fan can be quite a bit quieter overall. Just a note, if you have the PoE+ HAT, and the fan isn’t spinning at all, you probably need to pull the latest updates for the Raspberry Pi OS, as the enablement code has landed quite recently.

The final complaint is that the PoE+ HAT doesn’t properly block backfed power when it’s left on a Pi powered via the USB C plug. There is an annoying coil wine, and the HAT actually powers the high voltage side of its power supply circuit. This is obviously not ideal behavior. It would have been nice to have the backfeed protection, but the official documentation does address this: “When the Raspberry Pi PoE+ HAT is connected to your Raspberry Pi, your Raspberry Pi should only be powered through the ethernet cable. Do not use any additional method to power the Raspberry Pi.”

Once I had my cyberpunk lighting rig set up, I thought it would be useful to find the hard limits and see how many pixels each HAT could power. The original HAT lit up 75 of them, but trying for 76 tripped the overcurrent protection. That indicates that 2.5 amps of output power is the threshold.

Now how many pixels can we turn cyberpunk purple with the PoE+ HAT? Once I hit 250 pixels, the resistance of the strip became a major factor, and increasing the driven pixels wasn’t really increasing the load. The last pixels were a noticeably different color as a result. To continue the experiment, I switched over to testing at pure white, AKA the individual red, green, and blue LEDs turned to 100% brightness. In this configuration, I was able to drive 140 pixels. The PoE+ Hat reported a maximum current of 5.4 amps, while my PoE switch showed that port pulling 30.6 watts of power, at a respectable 87.9% efficiency. The hard limit I finally hit was 5.5 amps at the HAT, at which point the Pi power cycled.

After a few minutes of driving the PoE+ HAT way beyond its rated power output, I measured 56.8°C at the hottest point I could find. That is an impressive, tough little board. I wouldn’t be comfortable running at those levels for long, or unattended, but it’s nice to know that it does work, and no magic smoke was released. Based on what Eben had to say about the device, 25 watts of power seems like the maximum power number to aim for. Given that the Pi itself will take at least 2.5 watts, essentially at idle, that leaves 22.5 watts of power you can potentially use for something clever. And all this with just an Ethernet cable running to the Pi. So the question, is what can you do with 22.5 watts? LED lighting is the idea that was obvious to me, but I’m confident the Hackaday community will continue to surprise me in what you can come up with, so let us know what you want to do with the PoE+ HAT.

Posted on July 18 in category News

social_news_33635
https://blabley.org/hands-on-with-the-raspberry-pi-poe-hat/
Hands On With the Raspberry Pi POE+ HAT