Hands On With a Batteryless E-Paper Display

The content below is taken from the original ( Hands On With a Batteryless E-Paper Display), to continue reading please visit the site. Remember to respect the Author & Copyright.

E-paper displays are unusual in that power is only needed during a screen update. Once the display’s contents have been set, no power whatsoever is required to maintain the image. That’s pretty nifty. By making the display driver board communicate wirelessly over near-field communication (NFC) — which also provides a small amount of power — it is possible for this device to be both wireless and without any power source of its own. In a way, the technology required to do this has existed for some time, but the company Waveshare Electronics has recently made easy to use options available for sale. I ordered one of their 2.9 inch battery-less NFC displays to see how it acts.

An E-paper display is black and white, very high contrast, and doesn’t look quite like any other electronic display. It is about as readable as ink on paper, or somewhat more accurately, like LCD pixels but without any constraints on the viewing angle. With standard drive electronics, pixels are only capable of being either black or white, but image dithering to produce pictures with the appearance of greyscale works quite well. 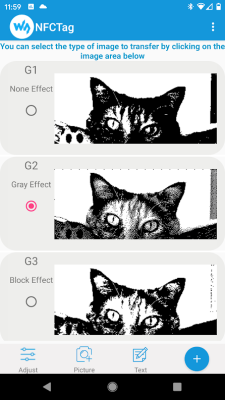 The display needs power only during a change of screen contents, and power for that comes from an NFC connection. There are evaluation kits of dedicated hardware for this purpose, but another option is a handy phone app. The app provides a simple way to send text or images to any of the Waveshare NFC displays.

Handily, images can be easily cropped and dithered in a variety of ways within the app before transmission, providing a WYSIWYG (what you see is what you get) preview. There is no need to push the change to the screen in order to see how it will look, and this really helps make sure results will look good before it ever hits the screen.

When connecting, there is a definite “sweet spot” for the NFC connection to work, but it’s not hard to get used to. On my Pixel 2, the display needs to be placed right up against the back of the phone and just under the camera while the app is open, and the process begins automatically. An update takes about three seconds, during which the screen briefly goes chaotic and snowy before it updates with the new content. In general, if the connection is broken prematurely, the screen remains unchanged.

I was able to successfully update the screen by holding the phone up to either the front or the back of the display. It didn’t seem to care much which way, but the display always needed to be placed right up against the phone.

What’s it Good For?

A battery-free display is pretty nifty, but what are the intended applications? The vendor lists price tags, labels, and name badges as some of the suggested uses, so I decided to do a simple evaluation of each of those to see how well the display performed.

Text is obviously readable, so I tested both a simple barcode and a QR code. After uploading them to the display, I tested whether they could be read and decoded. Unsurprisingly, both worked flawlessly. 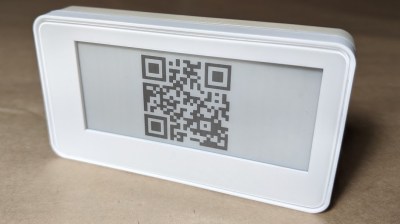 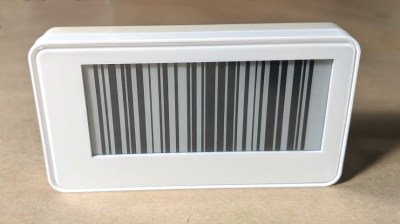 Testing it as a name badge took a little more work. I designed and 3D printed a holder that allowed me to mount a safety pin on the back so I could pin it to clothing like a name badge.

A handy feature of this display is that its enclosure has some little spring-loaded tabs on the back which can be used to clip the display into a carrier system (presumably one found on shelving units) and I took advantage of this to design a holder that was as small and light as possible while still being compatible with the spring-loaded tabs.

To attach a safety pin, I designed the simplest interface I could think of to accommodate multiple pin sizes. Two curved pieces on the back allow for a variety of safety pin sizes, and gravity does the rest. You can see more details and download the 3D models for the name badge adapter here.

The display is not particularly large or heavy, but I still wasn’t sure whether it would make a workable name badge. Thanks in part to the lightweight carrier that adds only minimal thickness, the display worked fine when pinned on and was perfectly readable, even at a distance. The badge could still be updated from the front with the phone app, but while worn in this way I could no longer update it from the back. (Recall that it needs to be touching, or nearly touching, before the NFC update will work.)

Is Batteryless a Gimmick?

As mentioned, the technology to make these displays both wireless and battery-free has been around for years, but when we first mentioned Waveshare’s offerings it was a new thing to see ready-to-use versions for sale online. It’s worth pointing out that in terms of making the display usable, the phone app is very nearly as important as the display itself. Being able to easily and conveniently update the display with little effort and no additional hardware goes a long way towards making the unit useful.

Not having a battery is remarkable, but how useful is it really from a hacker project perspective? Power needs for a display like this are so low that it’s hard to imagine battery life being much of a concern. Swapping out a coin cell once every couple years doesn’t hurt much on a single device. For an entire warehouse, that would obviously make more sense.

But when it comes to hacker projects, no battery probably makes the device somewhat lighter and smaller, but does it enable anything particularly special? It’s sure neat, but is a display like this the missing link for any particular project or concept? If any light bulbs are going off in your head, be sure to share it with us in the comments.