The content below is taken from the original ( Game Builder Lets Kids — Even Old Kids — Build Games), to continue reading please visit the site. Remember to respect the Author & Copyright.

One rite of passage back in the good old days of owning a TRS-80, Commodore 64, or similar vintage computer was writing your own game. It probably wouldn’t be very good, but it wouldn’t be much worse than most of the stuff that was out there, either. Today, trying to get a kid interested in “hunt the wumpus” is probably not going to fly and having them create a modern-looking is out of the question. Or is it? Disguised as a game itself, Game Builder offers an interactive way to create interesting games without having to get too detailed into programming. On the other hand, it supports JavaScript, so you can get to programming if you need to or want to. We could easily see a kid — or even an adult — easing into programming using this game which is free, from Google.

In the old days, hardware was a limiting factor and Basic made it pretty easy to whip out some text or crude graphics. Our favorite was a high low game that guesses your number. But everyone had some little game they’d create so they said they could. Today’s games, though, have good graphics and music and 3D shapes and a host of other things you didn’t have to contend with back then. Game Builder, though, makes it pretty simple. You can work on a game by yourself, or with friends, or with the general public. Everyone involved can play the game, but they can also edit the game. The tool runs under Steam so even though it is marked for PC or Mac, it will also run on Linux if you have Steam installed properly.

There is very little difference between playing and editing. You can start with a template or a blank canvas. At any time during game play, you can switch to edit mode with a mouse click or the tab key. If you start with the blank template, you get four player characters on a big green field. But you can change anything you want. You can hide players, change their representations, or even their physics.

When you enter build mode you get a menu down at the bottom that lets you pick: create, move, rotate, scale, terrain, text, logic, or edit. Most of these are exactly what they sound like. You can create from a wide number of models that tie into Google poly. The terrain mode is like Minecraft where floors are built from blocks. The logic menu is what’s really interesting though.

Each actor can have a number of cards arranged in panels. For example, a player might have a panel for health. A card within would set how many life points the player has and what to do when there are no more. Another card might register a collision with an object that has a weapon tag and use it to deduct points from the player’s life. Other cards control motion, display attributes, and so on. There are cards that have if/then/else logic and cards that react to events like collisions, time, or the start of the game.

In the figure, you can see a card on the left making a platform on the right move back and forth. Each card has settings that vary depending on its function. In this case, you can control the speed, for example. 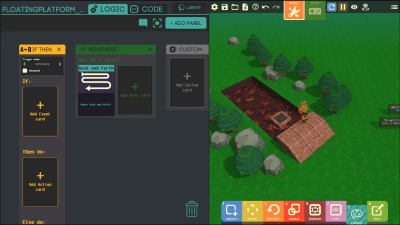 The cards actually have JavaScript behind them, which you can convert into if you want finer control. The edit menu command lets you set an actor’s appearance and also their physics. You can, for example, make objects heavy or immovable. You can determine how they bounce and if you can push them. There are handy presets for common items like characters and walls.

It sounds a little complicated, but if you do the tutorial it is really quite simple. The nice thing too is if you are in a game and you see something you want to know how to build yourself, you can just slip into build mode and look at the logic behind it. In fact, one of the demos is nothing more than things to look at in that way. There is a rocket to launch and a tree you can cut down with an ax. You can even paint rocks.

You might enjoy the video from [Shojib] below to see how it works, but it is more fun to just go load it and try it. There’s also an official tutorial video below the first one. It isn’t hard to pick up, especially if you work the tutorial and the card fair demo.

Often when we are talking video games around here, we mean something old fashioned. We’d like to see someone do some classic games with this, such as Space Invaders or PacMan. We think you could do it.

Posted on June 18 in category News