Fast Indoor Robot Watches Ceiling Lights, Instead of the Road

The content below is taken from the original ( Fast Indoor Robot Watches Ceiling Lights, Instead of the Road), to continue reading please visit the site. Remember to respect the Author & Copyright. 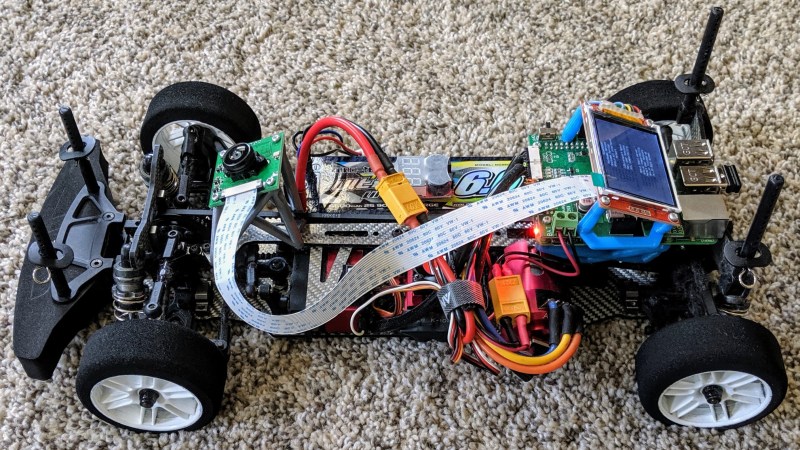 [Andy]’s robot is an autonomous RC car, and he shares the localization algorithm he developed to help the car keep track of itself while it zips crazily around an indoor racetrack. Since a robot like this is perfectly capable of driving faster than it can sense, his localization method is the secret to pouring on additional speed without worrying about the car losing itself.

To pull this off, [Andy] uses a camera with a fisheye lens aimed up towards the ceiling, and the video is processed on a Raspberry Pi 3. His implementation is slick enough that it only takes about 1 millisecond to do a localization update, netting a precision on the order of a few centimeters. It’s sort of like a fast indoor GPS, using math to infer position based on the movement of ceiling lights.

To be useful for racing, this localization method needs to be combined with a map of the racetrack itself, which [Andy] cleverly builds by manually driving the car around the track while building the localization data. Once that is in place, the car has all it needs to autonomously zip around.

Interested in the nitty-gritty details? You’re in luck, because all of the math behind [Andy]’s algorithm is explained on the project page linked above, and the GitHub repository for [Andy]’s autonomous car has all the implementation details.

The system is location-dependent, but it works so well that [Andy] considers track localization a solved problem. Watch the system in action in the two videos embedded below.

This first video shows the camera’s view during a race.

This second video is what it looks like with the fisheye lens perspective corrected to appear as though it were looking out the front windshield.

Small racing robots have the advantage of not being particularly harmed by crashes, which is something far more embarrassing when it happens to experimental full-sized autonomous racing cars.

Posted on October 25 in category News