The content below is taken from the original ( DroneDeploy teams with Boston Dynamics to deliver inside-outside view of job site), to continue reading please visit the site. Remember to respect the Author & Copyright.

DroneDeploy, a cloud software company that uses drone footage to help industries like agriculture, oil and gas and construction get a birds-eye view of a site to build a 3D picture, announced a new initiative today that combines drone photos with cameras on the ground or even ground robots from a company like Boston Dynamics for what it is calling a 360 Walkthrough.

Up until today’s announcement, DroneDeploy could use drone footage from any drone to get a picture of what a site looked like outside, uploading those photos and stitching them together into a 3D model that is accurate within an inch, according to DroneDeploy CEO Mike Winn.

Winn says that while there is great value in getting this type of view of the outside of a job site, customers were hungry for a total picture that included inside and out, and the platform which is simply processing photos transmitted from drones could be adapted fairly easily to accommodate photos coming from cameras on other devices.

“Our customers are also looking to get data from the interiors, and they’re looking for one digital twin, one digital reconstruction of their entire site to understand what’s going on to share across their company with the safety team and with executives that this is the status of the job site today,” Winn explained.

“They want fewer people on those job sites, only the essential workers doing the work. So for anyone who needs information about the site, if they can get that information from a desktop or the 3D model or a kind of street view of the job site, it can really help in this COVID environment, but it also makes it much more efficient,” Winn said.

He said that while companies could combine this capability with fixed cameras on the inside of a site, they don’t give the kind of coverage a ground robot could, and the Boston Dynamics robot is capable of moving around a rough job site with debris scattered around. 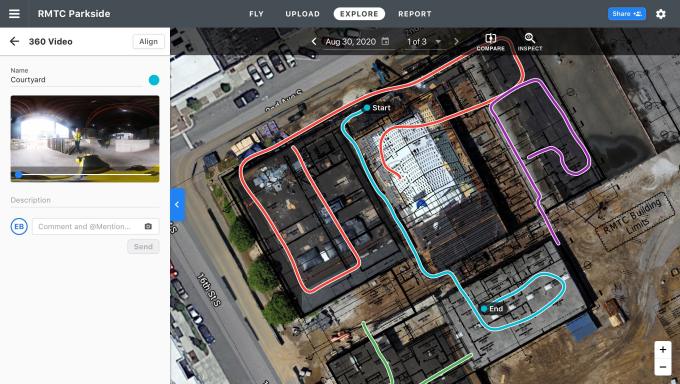 While Winn sees the use of the Boston Dynamics robot as more of an end goal, he says that more likely for the immediate future, you will have a human walking through the job site with a camera to capture the footage to complete the inside-outside picture for the DroneDeploy software.

“All customers already want to adopt robots to collect this data, and you can imagine a Boston Dynamics robot [doing this], but that’s the end state of course. Today we’re supporting the human walk-through as well, a person with a 360 camera walking through the job site, probably doing it once a week to documents the status of the job sites,” he said.

DroneDeploy launched in 2013 and has raised over $100 million, according to Winn. He reports his company has over 5000 customers with drone flight time increasing by 2.5x YoY this year as more companies adopt drones as a way to cope with COVID.